25 Things Not To Do in Japan – Explained! 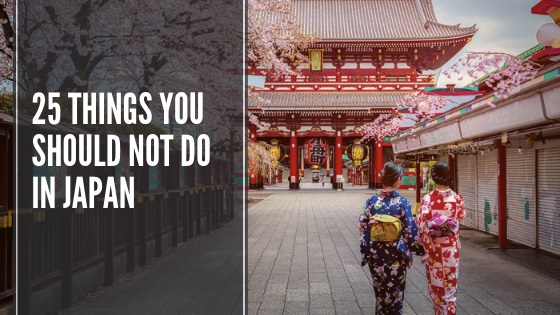 Did you know that there are things NOT to do in Japan? This unique country has several manners and customs that are totally different from yours.

Having a faux-pas trip to this country is a horrible thing. You would rather know some of these Japanese manners and customs than let such a thing happen to you.

So if you travel to Japan for the first time, here are the 25 etiquettes to help you avoid being rude to locals and make your travel a memorable one.

25 Things Not To Do in Japan When You Travel

1. Don’t wear shoes inside the house.

It is one of those Japanese etiquettes you need to consider when you enter their residences. As part of maintaining proper hygiene, they avoid dust and dirt from the street to contaminate their floors or tatami mats. This good practice prevents them from getting diseases.

So, it is typical in Japan that houses have Genkan in the entranceway. It is like a small pit after the doorway.

Remember, you have to remove your slippers or shoes at the Genkan when entering a room with hardwood flooring or Tatami.

2. Don’t forget to use toilet slippers.

Japanese houses also have a special pair of slippers for toilet use apart from the regular one used inside the house. They place these slippers at the toilet entrance.

So, make sure you switch the regular house slippers to toilet slippers before you enter their toilet or bathroom. This manner is also part of proper hygiene practices, which help prevent floor contamination.

Japanese are known for being well-mannered. You will be surprised at how they take queuing up to an extraordinary level. Voluntarily they wait in line without complaining when buying food in food stalls, eating in the restaurant, and even in a convenience store.

Standing in line in crowded areas like train stations, summer festivals, concert events, is always observed in Japanese people. So it would be considerate of you to follow the standard of queuing up when you travel in Japan.

In other countries, eating your food while walking is quite normal but a big NO-NO in Japan. Japanese people prefer to consume while standing still or sitting when buying foods or drinks in the street food stalls, fast-food fare, and the vending machine.

This manner will somewhat maintain the cleanliness in the surroundings, but it is more about their deep respect for food. So even if you are in the restaurant you should consider this eating manner of Japan, stay when you eat.

Tipping for good service is a standard practice in America but not in Japan. It is no part of their culture. In fact, they viewed it as rude or insulting action.

Make sure you keep it in mind after you eat in the restaurant or after riding a taxi, or even after receiving services from hotel staff, masseuses, and other workers, do not give tips. Just be polite and say thank you to them.

Another thing you should not do when in Japan is the improper use of chopsticks. This action is considered rude for them. Here are some situations you need to avoid when using chopsticks.

These chopsticks manners are very important when you eat in any restaurant in Japan.

Sniffling and not blowing your nose is acceptable in Japan. But repeatedly sniffling is considered rude as well. To avoid upsetting locals, here are the proper ways to blow your nose.

In other countries like America and Europe, handshaking and hugging is a common way of greeting. However, in Japan, doing this physical contact is generally an uncomfortable gesture. Japanese people greet each other by an appropriate bowing.

Also, demonstrating affection in public is not acceptable by many in the country. Such gestures include holding hands, walking arm-in-arm, and kissing on the streets.

Therefore, you should avoid them when in Japan.

Drinking with your Japanese friends in bars or clubs, you must consider this drinking etiquette in Japan. Do not pour your drink and wait for your friend to refill your glass.

It is a polite gesture to wait for the group to finish drinking and not pour a drink into your glass because you want to drink more. But what if you do not want to drink anymore? You can simply leave your glass full if you have reached your limit.

Not littering is a very noticeable manner of the Japanese. That is why you can rarely see garbage on their streets because usually, they are spotless.

Part of the Japanese cleanliness practice is to take their rubbish until they can properly dispose of it. They also practice segregation of waste, in which people and businesses were obliged to do it.

According to the Plastic Waste Management Institute, the recycling rate of Japan is almost twice of the UK and way beyond compared to the 20% figure of the USA.

Since cleansing is rooted in their culture and tradition, you will notice that Japanese people have rules in proper bathing.

The process of bathing at home is somehow similar to bathing at the onsen (hot spring) or sento (public bath). When taking a bath at home, here are steps you need to follow:

Make sure you keep the water in the tub clean with no soap on it for other members of the family who will use it. However, if you are a guest in the house, usually you get first dibs on the bath.

If you pay bills in Japan, don’t hand the cash over to a store clerk. Because transferring cash hand on hand is considered too forward and improper.

To pay bills, you will leave money on the tray to avoid touching each others’ fingers. Besides, using a cash tray saves time and maintains cleanliness.

14. Don’t put business cards in your back pocket.

The business card in Japan symbolizes their pride and status. It is just like their other self. So keep in mind that when you accept a business card, you have to receive it with both hands placing your fingers on the edges of the card.

Because using one hand is considered impoliteness. To show respect, you must keep it carefully in your wallet or a safe place.

In general, having tattoos were not allowed inside the onsens or hot spring and the public hot bath. Tattoos are still considered taboo in Japan, and they associated them with a gang (Yakuza). However, some establishments in Japan are allowing visitors with small tattoos with the condition that they have to cover them.

Pointing at someone using an index finger means you are threatening or insulting. To avoid doing so, you can use an open hand when indicating something.

This body gesture is ordinary to you but means something in Japan. So, it is better to avoid it to avoid misinterpretation by locals.

17. Don’t keep your hands in your pockets.

Keeping your hands in your pocket while having a conversation is also impolite in Japan. It means that you are not interested and showing not being attentive. Be aware of this body gesture while talking to locals during your Japan trip.

Giving-gift is common in Japanese culture, but there are things you should not do. What are those?

For example, if you burped loudly in the restaurant, you are being impolite, and some may ask you to leave. So be careful not to burp.

Whether you’re eating in someone’s home or restaurant, leaving food on your plate is not a proper manner in Japan. It is considered wasteful and rude. It is just like you are spilling food on yourself or the table.

To avoid spilling, you have to hold the plate or bowl underneath your chin when you take each bite.

21. Don’t sit cross-legged on the floor if you are a woman.

Did you know that in Japan, only men can sit cross-legged on the floor? Yes, it is not appropriate for women.

The polite and formal way to sitting position for women seiza style. Here is the proper way to do it:

But whenever they feel uncomfortable, the most common alternative sitting position is Yoko-Zuwari (sitting with your legs to the side while folded back on themselves).

22. Don’t open and close the taxi door by yourself.

The taxi doors in Japan are automatic which means it opens and closes by itself. If ever you take a taxi for your travel, don’t be surprised about this distinctive way of service. But since the door opens automatically, you should remember to stand a few steps back so that it will not hit you.

It is inappropriate to pour soy sauce over sushi. Too much soy sauce is considered wasteful, and wasteful is rude. So pour only enough soy sauce in a bowl and add later if needed.

24. Don’t be afraid to slurp your noodles.

Loud slurping when eating noodles is rude in other countries, but this is contrary to Japan because they are considered rude not to slurp with your noodles. So, don’t be afraid to slurp because that’s how you will enjoy the soup and the noodles at the same time you cool down it into your mouth.

The Japanese are very punctual. They make sure that they will not be late with their appointments like going to dinner, going for an interview, seeing a doctor, or meeting a friend.

It is the same manner when it comes to their Train System schedules. Arriving late at the destination is very unusual. Be sure to arrive early, don’t be late in Japan. 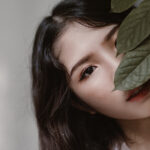 10 Things To Do in Japan To Have A Fun Travel 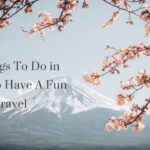